Hello, I am Dr. Phil, Songster and

Aficionado of the sounds of the Deep South

Only a week away from my Dunoon Burgh Hall gig. Have a Valentine night out celebrating 90 years to the day since Mississippi John Hurt's 1928 recordings in Memphis.

This multi-media presentation, accompanied by story-telling and music performances by Dr Phil, tells the fascinating and often humorous story of John Hurt from his birth to freed slaves, through the trials and tribulations of being black in rural Mississippi in the first half of the last century, to his initial discovery in 1928 and subsequent rediscovery in 1963. The presentation also features the playing of rare examples of Mississippi John Hurt’s original 78 rpm records from 1928 played on a 1920s wind-up Victrola phonograph. The presentation will be followed by a concert focussing on the music of Mississippi John Hurt. See gig page for more information.

I present audio-visual presentations on

The Sounds of the South

Mississippi John Hurt: His Life, His Times, His Blues - Page 2

Interestingly, although we tend to use the word ‘blues’ as a kind of shorthand, most of us aficionados appreciate a wider spectrum than strictly blues. I am no exception and my particular likes and repertoire developed from hearing my mother play the piano at Saturday night parties at our house. She would play wartime and popular tunes of the day such as Pistol Packin’ Mama from 1942 and Cigareets and Whisky and Wild, Wild Women, written in 1947, but the music that I remember most was ragtime, which probably embedded my love of American music deep in my subconscious. I was about 8 years old. One of my mother’s and my favourites was Twelfth Street Rag.

Soon after, I was to hear perhaps the most influential record I have ever heard; it was The Lonnie Donegan Skiffle Group recording of Rock Island Line in 1955; I was just 12 years old. I immediately put a guitar on my Christmas list; there was no going back. I was soon emulating Donegan’s version of this and many other songs on my first guitar using three chords in the Key of D. It was a cheap Spanish guitar with nylon strings to which I fitted steel strings, in keeping with my hero, and this promptly ripped the bridge off! I began to learn more Donegan tunes and I particularly enjoyed the blues, work songs and spirituals that he played such as, In the Evening, New Burying Ground and Ain’t No More Cane on the Brazos, rather than the more popular hits. It was Donegan that led me into learning more of the origins of the music and listening to the original versions; previously, I had assumed that he wrote this stuff! The credits of Donegan’s music, apart from the vague phrase ‘Traditional arr. Donegan,’ provided the names of Leadbetter, Guthrie, Broonzy and others; he had re-arranged many of the songs of Leadbelly and Woody Guthrie and some by Big Bill Broonzy, Jimmie Rodgers and the Carter Family. A whole new world was opening up to me.

Over the next thirty odd years I amassed a huge collection of records and CDs mainly of early country blues, gospel and jazz. One particularly life changing moment was of course when, around 1970, I got back from the second hand store with the OJL vinyl album of the Mississippi Blues. Half way through side two was Mississippi John Hurt with Stack O’Lee Blues. I can remember the moment to this day. It was mind-blowing.

From time to time I fell into the trap of purism, focusing on specific tunes and artists that to me were ‘authentic’ and dismissing everything else. Now I play anything that I, and my audiences, like, and after all, that’s what the blues men did! However, I find it difficult not to impose a thumping alternating bass on everything I do!

'Spreading the Gospel of the Country Blues' 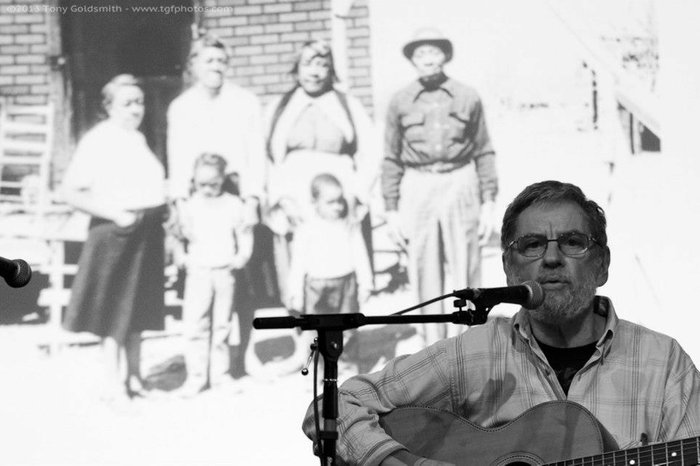